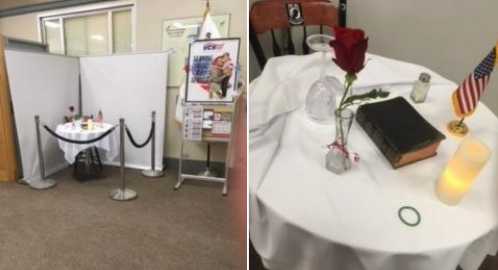 MANCHESTER, N.H. — A Church-State separation group that objects to the government promotion of Christianity in the military has filed suit to challenge the inclusion of a Bible on a Missing Man table at a New Hampshire Veterans Administration (VA) hospital. “We would all be outraged if the MVAMC (Manchester Veterans Medical Center) only provided care to Christians, or denied care to non-believers, or those who worship their God in other ways. The placement of a Christian Bible on this sacred table is just as objectionable,” reads the lawsuit filed by the Military Religious Freedom Foundation (MRFF). The organization filed the suit on behalf of complainant James Chamberlain, who identifies as a Christian, but “believes that our Constitution prohibits the establishment by the government of any specific religious belief,” according to the legal challenge. “Here, the placement of the […]

← Prev: Vermont to Pass Constitutional Amendment to Murder the Unborn Next: Israel Celebrates Its 71st Anniversary Days after Violent Attacks →