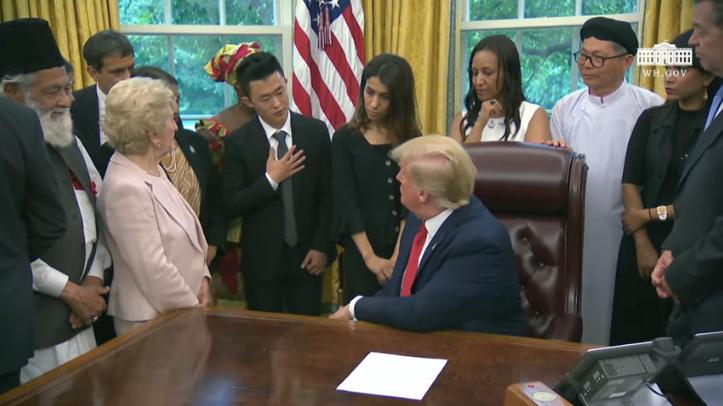 WASHINGTON — Christians were among those who were recently represented before President Trump in the Oval Office as he heard stories from those around the world who have experienced persecution personally or in their family life due to their faith.

“As Christians in Myanmar, we are being oppressed and tortured by the Myanmar military government,” one man stated. “We don’t have a chance for religious freedom as ethnic armed groups fight against the central military government. Please, American government, focus on ethnic people and ethnic leaders to get democracy and federalism.” “My parents are pastors; they’re Christian pastors,” also shared a woman from Iran. “They’ve been arrested – all my family – my father, my mother, my brother. They are free on bail, awaiting the trial and long sentences.” According to reports, 27 people from 16 countries visited the […]

← Prev: There's a new religion in America! The US government just officially recognized the Satanic Temple as a religion Next: 3,500-Year-Old Staircase Hints at Biblical Conquered Canaanite Kingdom’s Grandeur →