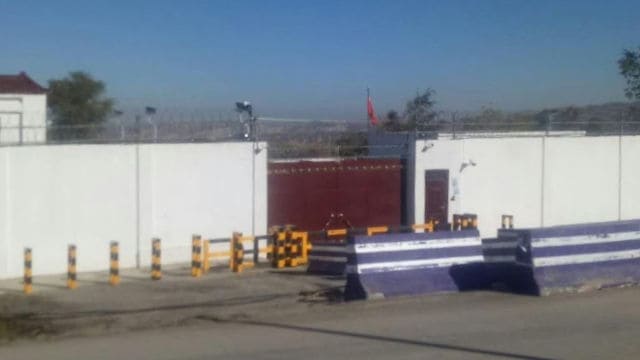 Not only Muslims are imprisoned at “transformation through education” camps. One Christian tells of her confinement, indoctrination, and continuing threats.

Recently, a Christian who was detained at a transformation through education camp in Xinjiang told Bitter Winter about the details of her life in detention. She reports that military training, sitting in silence, singing “red” songs, and studying propaganda constituted the entirety of her long “prison” life.

Yang Lan (a pseudonym) is a Christian of The Church of Almighty God. She became a target for arrest and “transformation” by the government because she persevered in her faith and did not yield to intimidation by the authorities. In 2017, while traveling away from home, Ms. Yang was intercepted by the police and imprisoned in a transformation through education camp without any judicial review.

“I was sent to a training school [transformation through education camp] surrounded by high walls and electrified wire, with turrets and lookout towers. There are fully-armed sentinels. It’s like a prison,” said Ms. Yang. “I was monitored by surveillance cameras 24 hours a day. I didn’t have any privacy whatsoever.”

Ms. Yang reports that more than 300 “students” were imprisoned at the camp. Most of them were Uyghur Muslims, with only a few ethnic Huis and Hans. Among the Hans, several of them were Falun Gong practitioners, and also a few petitioners – those who exercise the ancient right from Imperial China to petition the central authorities for redress of grievances.

The living conditions were horrible. As Ms. Yang recalled, “More than ten ‘students’ were crammed into a 28-square-meter room. This is where we ate, drank, and relieved ourselves. Each room had two surveillance cameras. ‘Students’ are even monitored when using the washroom, and we had to report to the officers before we wanted to use it.”

The transformation through education camp employs military drills and militarized regimentation to indoctrinate the detainees. According to Ms. Yang, “Every day, we had to sing ‘red’ songs for an hour before meals were served. That was followed by one hour of military training, and then two hours of studies. We rarely had the opportunity to go outdoors, and we couldn’t meet with our families. No one knew when we would regain our freedom. This kind of life was tormenting for everyone.” She added that many students would break down in tears from the pressure, and others developed high blood pressure and heart problems.

“Detainees are not allowed to cry or tell the truth when talking on the phone with family members. We could only say how good the school, the food is, and accommodations were. We had to say that the teachers and leaders were good to us and cared about us, and other such lies.”

At the end of 2018, Chinese authorities selected a few camps and invited foreign reporters to visit in an attempt to counter international criticism. Many observers called this a “performance” to make the camps look less cruel than they are. For Ms. Yang, such “performances” are nothing new. She said that during her time in custody, there were frequent inspections by the “higher authorities,” and people would photograph and videotape them.

“Every week, we had to go to a large classroom for one class,” Ms. Yang says. “Usually, steel bars separated us from the teacher. But one time, someone came to film us. That time, the teacher stood amongst us on our side of the barrier and pretended to be teaching a class. The officers recorded speeches by two people. They also found a few Uyghurs who could dance and had them dance outdoors, and they gave us better food to eat at lunch. All of this was recorded for the central authorities.”

Yang Lan was released after one year. A police officer armed with a submachine gun warned her, “After you get out, you must not tell other people about things here. You cannot even tell your family. Otherwise, you know how severe the consequences will be.”

Even after being released, Ms. Yang never regained her freedom. Instead, she continues to be monitored by community authorities and the local police. She is required to report to the community office every morning and to copy, by hand, propaganda materials regarding the “spirit of the 19th Party Congress.” If she wants to leave the local area, she must submit an application to the community authorities and the police station. She is required to attend a flag-raising ceremony organized by the community every Monday.

Yang Lan doesn’t know when such supervision will end. She says that even though she has returned home, her life is not much different from being detained.

“If you believe in God, you can’t receive a subsistence allowance; if you rece…

Christians Arrested for Thanking the Lord
Instead of using frequent Christian expressions of praise, believers must thank …

← Prev: Campaign to Shut Down Temples Leaves Buddhists Homeless Next: Xinjiang Woman Struggles to Care for Her Grandchildren →