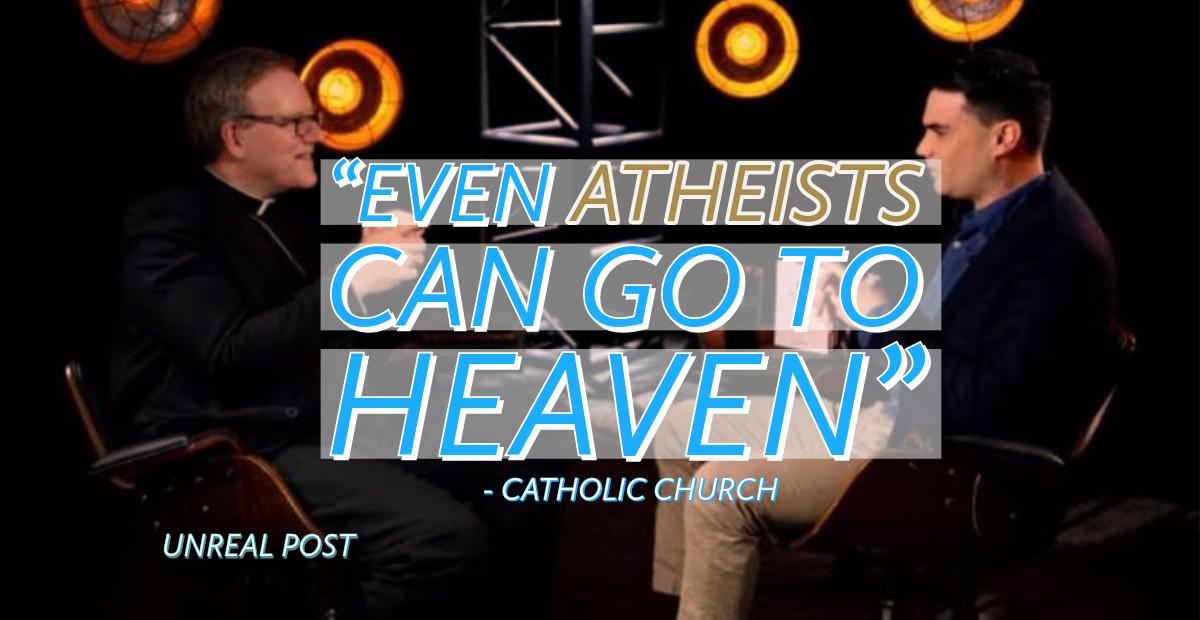 “Yeah, you can be saved,” Barron again affirmed, stating that even atheists “of good will” can go to Heaven.

The Catholic Church is rank with demonic power and leads millions upon millions to a devils hell. On the Ben Shapiro Show, Catholic Bishop shared with millions of viewers a false gospel that will send a person straight to the lake of fire. Strong language?  Yes, but no one cares. The Bible-believing Leaders are silent on the Catholic Church when they know they promote a false gospel.

If you watched any portion of the video of Ben Shapiro and Robert Barron of the Archdiocese of Los Angeles on the Ben Shapiro Show. You couldn’t help but cringe as the Catholic Bishop spoke. So many Bible verses should’ve been popping up in your mind.

‘For sin shall not have dominion over you, for you are not under law but under grace.’

Moreover, brethren, I declare to you the gospel which I preached to you, which also you received and in which you stand, by which also you are saved, if you hold fast that word which I preached to you—unless you believed in vain. For I delivered to you first of all that which I also received: that Christ died for our sins according to the Scriptures, and that He was buried, and that He rose again the third day according to the Scriptures,

Today under grace mankind is saved without the law. The law was the ministry of death, it was weak and beggarly. The Mosaic law has no saving power! NONE.

A person is saved today by believing that they are a sinner and doomed to hell but God because of His great love for you sent His Son Jesus Christ to die on the cross on your behalf. To pay the price for all your sin. Jesus Christ was buried in your place and was raised from the dead three days later so you can rise with Him.

that if you confess with your mouth the Lord Jesus and believe in your heart that God has raised Him from the dead, you will be saved.

For the message of the cross is foolishness to those who are perishing, but to us who are being saved it is the power of God.

Please read the full story below by Christian News Network.

In a video released on Sunday, Roman Catholic Bishop Robert Barron of the Archdiocese of Los Angeles told popular conservative commentator Ben Shapiro, who identifies with Orthodox Judaism, that those “outside of the explicit Christian faith can be saved” by following their conscience, or in Shapiro’s case, “following the commandments of the Law sincerely.” He pointed to the teachings of the Second Vatican Council as his basis.

“I feel like I lead a pretty good life, a very religiously-based life, in which I try to keep not just the 10 Commandments, but a solid 603 other commandments as well. And I spend an awful lot of my time promulgating what I would consider Judeo-Christian virtues, particularly in western societies,” Shapiro told Barron during a “Sunday Special” episode.

“So, what’s the Catholic view of me? Am I basically [in trouble] here?” he asked.

“No,” Barron replied, stating that while “Christ is the privileged route” as per John 3:16, the Second Vatican Council (1962-1965) “clearly teaches that someone outside of the explicit Christian faith can be saved.”

The Lumen Gentium of 1964 as published by the Vatican reads, “Those also can attain to salvation who through no fault of their own do not know the Gospel of Christ or His Church, yet sincerely seek God and moved by grace strive by their deeds to do His will as it is known to them through the dictates of conscience. Nor does Divine Providence deny the helps necessary for salvation to those who, without blame on their part, have not yet arrived at an explicit knowledge of God and with His grace strive to live a good life.”

“Yeah, you can be saved,” Barron again affirmed, stating that even atheists “of good will” can go to Heaven.

← Prev: The Secret Archive of the Warsaw Ghetto "Who Will Write Our Story" Next: Chinese Government Arrest 70 Year Old Woman for Sharing the Gospel →