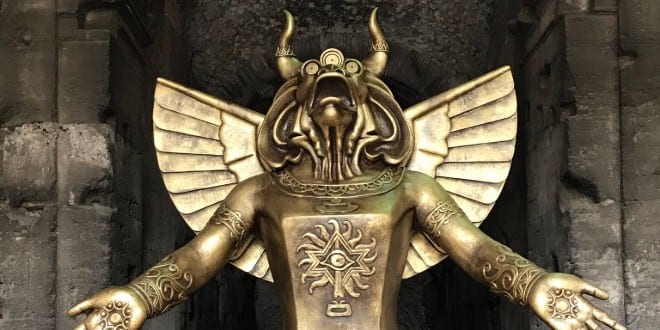 God commanded His chosen people, the Jews, the Israelites, that after they destroyed their enemies they were to destroy all carved images ‘pagan idols’ with fire. The Gentile ‘Pagan Idols’ are an abomination to the Lord and still are to this day. Here you have the Catholic Church approving the display of demonic pagan idols at the entrance of one eight wonders of the world. So, here you have a pagan idol that represents the murder of babies on display at one of the most popular tourist destinations in all the world and it’s there because the “the Catholic Church” said its okay.

‘And He will deliver their kings into your hand, and you will destroy their name from under heaven; no one shall be able to stand against you until you have destroyed them. You shall burn the carved images of their gods with fire; you shall not covet the silver or gold that is on them, nor take it for yourselves, lest you be snared by it; for it is an abomination to the Lord your God. Nor shall you bring an abomination into your house, lest you be doomed to destruction like it. You shall utterly detest it and utterly abhor it, for it is an accursed thing.’

Do not allow any of your offspring to be offered up to Molech, and do not profane the name of your God: I am Hashem. – Leviticus 18:21

The pagan Canaanite idol who required child sacrifice was displayed at the entrance of the Colosseum in Rome as part of a secular historical exhibition. The exhibition is part of a larger exhibit dedicated to Ancient Rome’s historic adversary, the city of Carthage. The exhibition is called ‘Carthago: The immortal myth’. It runs until March 29, 2020.

A source close to the matter told Breaking Israel News that: “There is no way that such a thing could be done without direct permission from the highest levels of the Vatican. The Colosseum of Rome is owned by the Vatican, and specifically the Diocese of Rome, also called the Holy See. If anyone wants to do anything there, they must get permission from the office of the Diocese of Rome. This exhibition, called “Cathargo: the immortal myth” could not be held there at all unless permissions were granted at high levels.”

The statue’s presence comes just over a week following a video that emerged in what appears to be Pope Francis blessing a Pachama Goddess statue. It is well known that the Vatican is currently hoarding Israel’s stolen treasures from the second Temple. 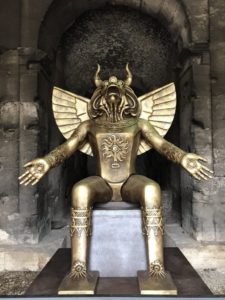 The god ‘Moloch’, was historically worshipped by both the Canaanites and the Phoenicians.