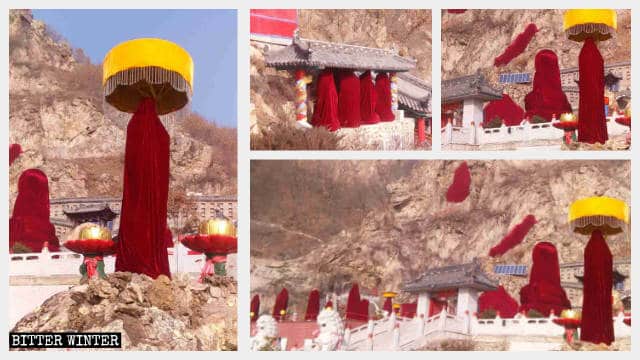 Images and videos of Buddhist statues being destroyed or covered keep flooding in – seemingly with no end in sight.

It’s not just religious believers the Chinese government is terrified of: They’re also intimidated by statues.

How else to explain the Chinese Communist Party’s (CCP) repeated campaigns to regulate and remove open-air statues throughout China? Numerous statues have been demolished, and many have been forced to be covered up, even Buddhist statues at protected historical and cultural sites have not been spared.

Like, for instance, the Thousand-Buddha Cave scenic spot, which is located in the county-level city of Zhuanghe under the jurisdiction of Dalian city, in China’s northeastern Liaoning Province. In September 2018, authorities ordered the removal of a Buddha statue more than 10 meters high on the grounds that it “was built outdoors and was too tall, which is against the law.” The authorities also demanded that Mr. Zhang (pseudonym), the Buddhist in charge of the Thousand-Buddha Cave, remove Buddhist symbols containing religious phrases and replace Buddhist flags with the national flag.

The Thousand-Buddha Cave was initially built in the Liao and Jin dynasties (907 to 1234 AD) but was destroyed during the Cultural Revolution. Starting in 2000, more than 500 Buddhists came to invest for the reconstruction, spending tens of millions of RMB (more than $1,500,000). In March 2001, the Thousand-Buddha Cave was classified as a “historical and cultural site protected at the municipal level” by the People’s Government of Dalian city.

But when it came time to take the Buddhist statute down, all of the government-hired demolition workers were unwilling to demolish it out of fear of incurring “divine retribution,” so government officials had the gall to order Mr. Zhang himself to hire his workers to destroy their own Buddha statue – and watched him to make sure he did, sources said.

A collection of outdoor statues of varying sizes were forcibly demolished, others have been draped in red cloth. Even the tomb that Mr. Zhang had prepared for his death was destroyed using explosives.

During the same period, the authorities used concrete and white insulation board to cover up a giant Buddha statue in the Mount Jiuhua tourist area in Liaoning’s Linghai city. The reason given by the authorities was that the government did not approve the Buddha statue.

On January 4, 2019, more than 10 law enforcement officers from Guangshui city in central China’s Hubei Province stormed into the Zushi Temple and smashed statues inside with sledgehammers, threatening to arrest the person in charge of the temple if he interfered.

Believer Dies While Running From CCP

After five years of persecution, a member of The Church of Almighty God fell s…

Under CCP Persecution, Chinese Citizen Escapes Death
Sun Juchang and his wife, Jiang Shuhong, together have spent a cumulative 1,382 …

← Prev: China and Venezuela: Business Partners Against Human Rights Next: British Muslims Rally to the Uyghur Cause →