British Muslims Rally to the Uyghur Cause 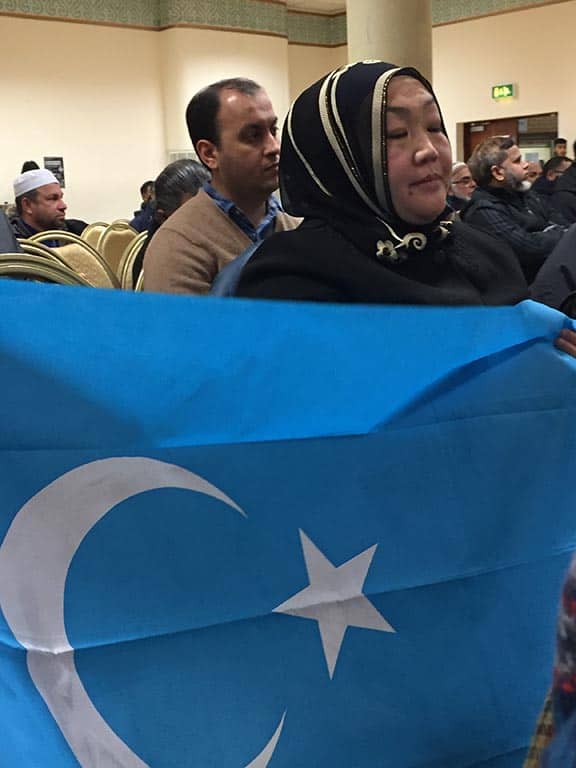 Muslims in London are supporting the Uyghur cause, spurred on to take up the challenge and stand against the atrocities being metered out by Beijing.

British Muslims are backing Uyghurs following evidence of mounting atrocities and forced assimilation in North West China. The deteriorating situation in the region of Xinjiang was flagged up recently at a public meeting in London to raise awareness of violence and torture in the Uyghur heartland and to call UK Muslims to stand against Beijing’s treatment of their fellow Muslims.

The meeting to coincide with the massacre of Uyghurs, in Ghulja, a city on the border of Kazakhstan in 1997, was called by the East London Mosque in Whitechapel and sponsored by the Cordoba Foundation. Speakers ranged from Uyghurs who have lost families in the most recent roundups in Xinjiang, to a British parliamentary shadow minister, and several campaigners in the field of human rights.

Harun Rashid Khan, Secretary General of the Muslim Council of Britain, urged participants to “loudly protest” against the injustices meted out by Beijing.

“Imagine the place that you have always lived turning against you,” he suggested. “Imagine, you are no longer allowed to speak your mother tongue, the language of your people, in public, that even when you do speak, it is with fear and self-censorship, in a climate of intense surveillance. Imagine hiding pages of the Qur’an in your freezer, so that you don’t fall foul of random checks. Imagine knowing that physical and psychological torture await you in secretive re-education camps, should you be picked up off the streets and detained for no reason,” said Harun Khan.

“Now imagine that all of this is state-sanctioned, legal and practiced by the government,” Mr. Khan continued, urging the audience to “refuse the injustices” for all they were worth and stand up for the Uyghurs. “Ordinary people must stand up, bear witness and act for change, ” he concluded.

Rahime Mahmut, singer and member of the Uyghur classical music ensemble in London, gave evidence at the meeting of the testimonies she has been privy to whilst working as a translator. She herself unable to return to her homeland for fear of incarceration, told of her own heartbreak when in 2017 her brother warned her against continuing to communicate with the family. “Please leave us in God’s hands, and we will leave you in God’s hands too,” were his last words to her after urging her to break contact with them for their safety.

Describing the so-called “re-education” facilities as “concentration camps,” she told of how stories given to her of everyday life and torture in the camps left her unable to sleep for days. “Their accounts were chilling and horrendous,” she said.

One person who was released only three months ago told her some people had been in prison for more than a year before being moved to transformation through education camps. He described his place of detention as a nightmare. “During his time of over three months in detention he told me he had been tortured daily,” she explained. “Over sixty people were crowded in a cell of sixty square meters. The worst humiliation was everyone having to strip off their clothes and parade around the cell in front of the others every night,” she said, adding, “Every day when the siren sounded everyone had to dive on top of everyone else and remain there until the siren stopped. Sometimes this would last for thirty minutes.”

This man had no idea why he had been arrested.

She spoke of another detainee who had spent a year in three different detention centers. He took four hours to retell his ordeal. He told her how people falsely admitted to making bombs despite never having seen a bomb in their lives in order to stop their torture. He recounted being taken into the interrogation rooms and hearing men and women screaming. “He said their screams made his legs feel like jelly,” she reported, adding that these accounts were only the tip of the iceberg. “There are many more horrendous crimes against humanity taking place every day and not only against those inside. Those on the outside are affected as well. The entire way of life for Uyghur people, whether it be dress, funeral rites, cultural heritage and traditions, language and religion, is under threat,” she said.

Uyghur exile, Mahmut Turdi, a teacher and animator, spoke of fleeing Xinjiang with his wife and making the UK his home in 2004. He detailed the harassment and incarceration of most of his family members between 2003-2018 simply because they could not persuade him to return to China. “Despite the fact I am a UK citizen, the Chinese government is still chasing me through my family,” he complained. “My crime is having renounced my citizenship,” he said.

Touched by these testimonies, Mrs. Emily Thornberry, a Labor Member of Parliament for Islington South and Finsbury and Shadow Secretary of State for Foreign and Commonwealth Affairs, had a “simple message to give, that must be heard by China.”

“We will not stand silent while the Uyghur community remains subject to the terrible repression and persecution simply because they want to practice their Muslim faith,” she said. “Hundreds of thousands are facing mass detention, cultural re-education, and psychological indoctrination, and a whole people is facing systematic oppression and brutal violence.”

She said the atrocities were akin to those carried out in Cambodia 40 years ago, or China 50 years ago; and other countries down the centuries where abhorrent prejudice based on religion, race, skin color were allowed to flourish unchallenged.

“For that to be happening today, two decades into the 21st century in a country that has a permanent seat on the UN Security Council is not just abhorrent, it is unacceptable, and it cannot be tolerated any longer,” she stressed.

She was dismayed that the number of Uyghurs currently being detained in re-education was at least one million and for many, for reasons as straightforward as merely attending the mosque. She was shocked at the increasing reports of torture, death and even organ harvesting that have emerged from the camps and urged public condemnation to be stepped up. “We must support the call by the UN for China to shut down the re-education camps now,” she pressed, stressing it was imperative that Uyghur asylum seekers are not deported back to China. “We must expedite their asylum applications here in the UK,” she insisted.

She urged the British Government to take action and suggested that first in line for censure under the Magnitsky Act, recently passed into law, should be Xinjiang State Secretary Chen Quanguo, for the clear abuse of human rights on his watch.

“We must not turn a blind eye to the glaringly obvious, that what was claimed to be an attempt to target extremism and terrorism has morphed into something horrendously different, where the only thing that is being targeted is those who practice the Muslim faith,” she complained. She demanded that private companies operating in Xinjiang, should cease operations and that Britain should consider imposing export controls on surveillance technology that is being used to oppress and monitor Uyghur Muslims.

“Whatever we do we need to act fast,” she pleaded. “China may be an important trading partner, and it is; and a vital player in the world, but that is all the more reason to demand that they act on human rights abuses. Now is the time to say enough is enough,” she said.

International human rights lawyer Rodney Dixon QC concurred with the urgency of the situation and urged courage in dealing with China. He advocated relentlessly pursuing political and legal avenues to bring China to task. “Seek to scrutinize those who are responsible and bring them to justice if not now, sometime in the future,” he said. “It can have a deterrent effect and make people think twice, but most importantly it can send a message to the world that these practices are unacceptable. And that there are consequences.”

“There is a wealth of evidence which goes to show that mass international crimes have been committed against the Uyghur people,” he said. “The proof is there. It needs to be refined and packaged and made strong.” He advocated determination and creativity in forcing Beijing to answer to international law and face the full consequences of their actions.


Xinjiang: Identities on Borrowed Time
A photographic journey through a region whose identity is threatened by “siniciz…

County in Xinjiang: A Case Study in Destroying Faith
A Bitter Winter reporter went to Shawan county to learn how government suppressi…

A Young Uyghur Woman’s Plea for Her Mother’s Release
Beijing’s war on terror is reining in Christians, adding to fears that its missi…