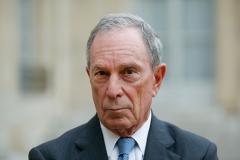 (CNSNews.com) – “We have a very few nondisclosure agreements,” former New York Mayor Michael Bloomberg admitted Wednesday night at the NBC-sponsored primary debate, but he refused to say how many, and he refused to release the people who signed them “because they were made consensually and they have every right to expect that they will stay private.”

The audience booed his answer.

“We are not going to beat Donald Trump with a man who has who knows how many nondisclosure agreements and the drip, drip, drip of stories of women saying they have been harassed and discriminated against. That’s not what we do as Democrats.”

The exchange began with NBC’s Hallie Jackson devastating Bloomberg just with her question:

Several former employees have claimed that your company was a hostile workplace for women,” Jackson said.

“When you were confronted about it, you admitted making sexually suggestive remarks, saying, quote, ‘That’s the way I grew up.’ In a lawsuit in the 1990s, according to The Washington Post, one former female employee alleged that you said, quote, ‘I would do you in a second.’ Should Democrats expect better from their nominee?” Jackson asked.

Bloomberg deflected, talking about how well women are doing at his company and “how happy” his employees are.

Invited to respond to his non-answer, Sen. Elizabeth Warren said, “I hope you heard his defense — ‘I’ve been nice to women.’ That just doesn’t cut it,” Warren continued:

The mayor has to stand on his record. What we need to know is exactly what’s lurking out there. He has gotten some number of women — dozens, who knows — to sign nondisclosure agreements both for sexual harassment and for gender discrimination in the workplace.

So Mr. Mayor, are you willing to release all of those women from those nondisclosure agreements? So we can hear their side of the story?

(The audience cheered and applauded.)

“We have a very few nondisclosure agreements–” Bloomberg started to say.

“How many is that?” Warren interrupted.

“Let me finish,” Bloomberg told her.

“How many is that?” Warren asked again.

Bloomberg continued: “None of them accuse me of doing anything other than maybe they didn’t like a joke I told. (Audience groans) And let me just — there’s agreements between two parties that wanted to keep it quiet. And that’s up to them. They signed those agreements, and we’ll live with it.”

“So wait,” Warren said, “when you say it is up — I just want to be clear. ‘Some’ is how many? And when you say they signed them, and they wanted them, if they wish now to speak out and tell their side of the story about what it is they alleged, that’s now okay with you? You’re releasing them on television tonight?” Warren asked.

“Senator, no–” Bloomberg started to say.  “Senator, the company and somebody else, in this case the man or the woman or it could be more than that, they decided when they made an agreement, that they wanted to keep it quiet for everybody’s interests. They sign the agreements, and that’s what we’re going to live with.”

I’m sorry, the question is, are the women bound by being muzzled by you? You could release them from that immediately. Because understand, this is not just a question of the mayor’s character. This is also a question about electability.

We are not going to beat Donald Trump with a man who has who knows how many nondisclosure agreements and the drip, drip, drip of stories of women saying they have been harassed and discriminated against. That’s not what we do as Democrats.

You think the women in fact were ready to say, I don’t want anybody to know about what you did to me? That’s not how it works. The way it works is they say, look, this is what you did to me and the mayor comes along and his attorneys say, I will give you this amount of money if you promise you’ll never say anything. That’s how it works.

The final word went to Mayor Bloomberg: “I said we’re not going to get — to end these agreements because they were made consensually and they have every right to expect that they will stay private.”

← Prev: 14 Parents Sue School District over Policy Allowing Children to Change Name, Gender Identity at School without Parental Consent - Christian News Headlines Next: <div>Klobuchar: 'I Wish Everyone Was As Perfect As You, Pete.'</div> →