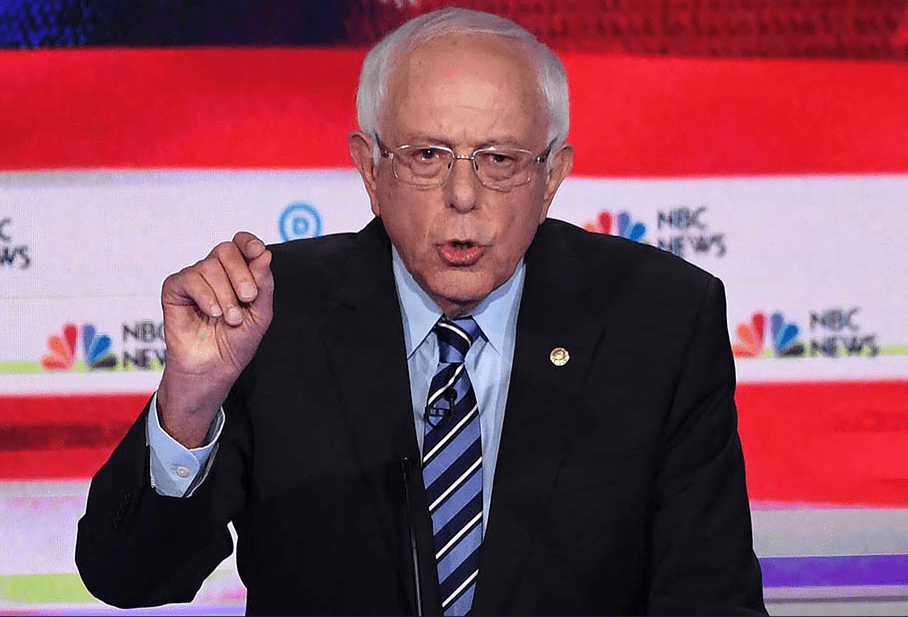 The Democratic party removed God from their platform and in its place is Abortion. Textbook definition of Proverbs 8:36.

“….All those who hate Me love death.”

Senator Bernie Sanders has ended his presidential campaign, paving the way for pro-abortion former Vice President Joe Biden to become the Democrats nominee. many Democrats wondered why it took Sanders so long to formally end his campaign after he came in second to Biden in a number of Democrat primary contests prior to the coronavirus outbreak.

Democrats coalesced around Biden as opposed to Sanders because exit polls show them mostly being concerned about defeating President Donald Trump. Somehow Biden is seen as having the ability to defeat Trump even though he is 77 and has a reputation for gaffes, misstatements, flip-flopping and groping women.

Sanders announced his decision to drop out in a staff call Wednesday, the day after Wisconsin’s Democratic presidential primary, which Biden won.

Although Sanders is seen as the more leftist of the two and is a self-proclaimed Socialist, Biden is, in reality, not much different on abortion compared with Sanders.

Biden will have a hard time winning over the majority of Americans who are pro-life, as he recently said he would force Americans to fund the Planned Parenthood abortion business on day 1.

It’s no surprise that Biden would force Americans to fund the Planned Parenthood abortion business, since he has an extensive record supporting abortions up to birth.

When it comes to abortion and appointing federal judges who have the power to determine the direction of abortion legislation, Biden made it clear during a Democrat debate he would not compromise as president.

“It’s a woman’s right to do that. Period,” Biden said, “And if you call that a litmus test, it’s a litmus test.”

Biden went further. He said if the Supreme Court were to overturn Roe v. Wade, he would push for a national law allowing abortions up to birth.

“If they ruled it to be unconstitutional, I will send to the United States Congress, and it will pass I believe, a bill that legislates Roe v. Wade adjusted by Casey,” Biden said.

Biden also touted his role in rejecting former President Ronald Reagan’s Supreme Court nominee Robert Bork when he was in the Senate, as Bork had said he favored overturning the landmark decision that has resulted in killing 61 million babies in abortions.

Keep up with the latest pro-life news and information on Twitter. Follow @LifeNewsHQ Biden once attempted to appear a a moderate on abortion but that has changed. After Biden came out supporting overturning the Hyde Amendment and forcing Americans to fund abortions, pro-life Americans made it clear they opposed his position supporting taxpayer-funded abortions up to birth. Biden then flip-flopped and said he would not support efforts to overturn the Hyde Amendment, which protects Americans from funding most abortions. But after an outcry from abortion advocates when he flip-flopped, Biden then flip-flopped again last June and now says he will support forcing Americans to fund abortions up to birth with our taxpayer dollars. Biden said he supported forcing Americans to pay for abortions. “It can’t stay,” Biden said of the Hyde amendment during an exchange with an ACLU activist earlier this month. The video of the exchange was posted by the ACLU on Twitter on May 8th Here’s the transcript of that exchange between Biden and an ACLU activist [emphasis added]:

ACLU Activist: I’m an ACLU Rights For All voter, and I have one quick question for you. And that is: Will you commit to abolishing the Hyde amendment, which hurts poor women and— Biden: Yes…. Yes. And by the way, ACLU member, I have a near-perfect voting record my entire career. ACLU: I heard you did. But I’m glad you just said you would commit to abolishing the Hyde Amendment. Biden: Right now it has to be… It can’t stay.

Biden clearly answered “yes” and “it can’t stay” when asked if he’d “commit to abolishing the Hyde amendment.” Naturally, pro-life organizations called Biden out for his support for taxpayer-funded abortion on demand and for changing his position repeatedly. SBA List President Marjorie Dannenfelser told LifeNews: “Joe Biden’s support for taxpayer funding of abortion after decades of opposition is just the latest example of Democratic extremism on abortion. Long gone are the days of ‘safe, legal, and rare.’” Polling data is clear that Americans oppose abortion funding. A January poll conducted by Marist University finds an overwhelming majority of Americans support restrictions on abortion and would like Roe v. Wade reinterpreted to allow restrictions on abortions. It also found that three-quarters (75 percent) of Americans oppose taxpayer funding of abortion abroad, fewer than two in 10 (19 percent) support such funding. Opposition to this funding includes most Republicans (94 percent) and independents (80 percent) and a majority of Democrats (56 percent). By a double-digit margin, a majority of all Americans oppose any taxpayer funding of abortion (54 percent to 39 percent). Despite the data, Biden is still an ardent abortion supporter. Biden has a strong pro-abortion voting record that goes back for many years, and he supported President Barack Obama’s leadership as the most pro-abortion president in U.S. history. What’s more, pro-abortion movement leaders say they “trust” Biden to protect abortion on demand. As the vice president, he supported the administration’s pro-abortion policies, including Obamacare, which forced religious employers to pay for drugs that may cause abortions. From 2001 to 2008, Biden’s voting record on pro-life issues was close to zero, according to the National Right to Life Committee. In 2005, for example, he voted against the Mexico City Policy, which prohibits funding to overseas groups that promote and/or perform abortions. He also voted repeatedly to require that military service members’ abortions be covered by taxpayer dollars. Kate Michelman, a former leader of NARAL, is not worried. “Joe Biden continued his evolution on the issue under Obama. He got there,” she told the newspaper. “I can’t say for absolute, 100 percent, but I would trust him as president to protect and defend a women’s right to choose.” To show how far Biden has come toward the pro-abortion view, he once likened an abortion to an operation — as if taking the life of a baby before birth is somehow beneficial in the same manner as a patient’s operation. Biden said: “Maybe where Romney is most sketchy is on women’s rights. I got a daughter and lost a daughter. I’ve got four granddaughters and Barack has two daughters. And this is to our core. Our daughters and our granddaughters are entitled to every single solitary operation, every single solitary opportunity!”