Seminary Students Repent to Plants, ‘Confess’ and ‘Sorrow in Prayer’ to Vegetation in Chapel Ceremony 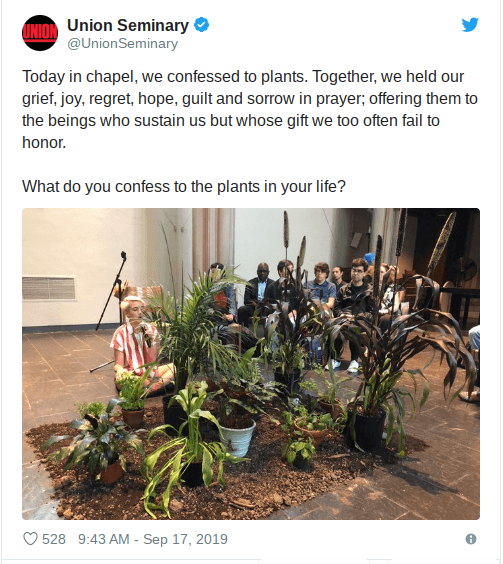 In a story that would seem to be some kind of satire, a seminary where students gathered together during a chapel ceremony to “confess,” “grieve” and “sorrow in prayer” toward an assortment of potted plants laid out on the floor.

Actually took place as a part of an activity that, school officials say, was done to “atone for the harm” caused by climate change. Union Theological Seminary (UTS), a progressive-identifying school located in New York City, which is affiliated with nearby Columbia University, tweeted out a picture and message on Tuesday from a chapel meeting where students gathered around various plants as an “offering” to the “beings who sustain us but whose gift we too often fail to honor.” The tweet asked the question, “What do you confess to the plants in your life?” Today in chapel, we confessed […]

Today in chapel, we confessed to plants. Together, we held our grief, joy, regret, hope, guilt and sorrow in prayer; offering them to the beings who sustain us but whose gift we too often fail to honor.

What do you confess to the plants in your life? pic.twitter.com/tEs3Vm8oU4

← Prev: Transgender Man Who Gave Birth Loses Case, Must Be Listed as ‘Mother’ Next: ‘Sheep Among Wolves’: Iran Is the Surprise Nation With ‘Fastest Growing’ Christian Church — and It’s Led by Mostly Women →