Apostasy, Doctrines of Demons and Lack of Faith in the Church 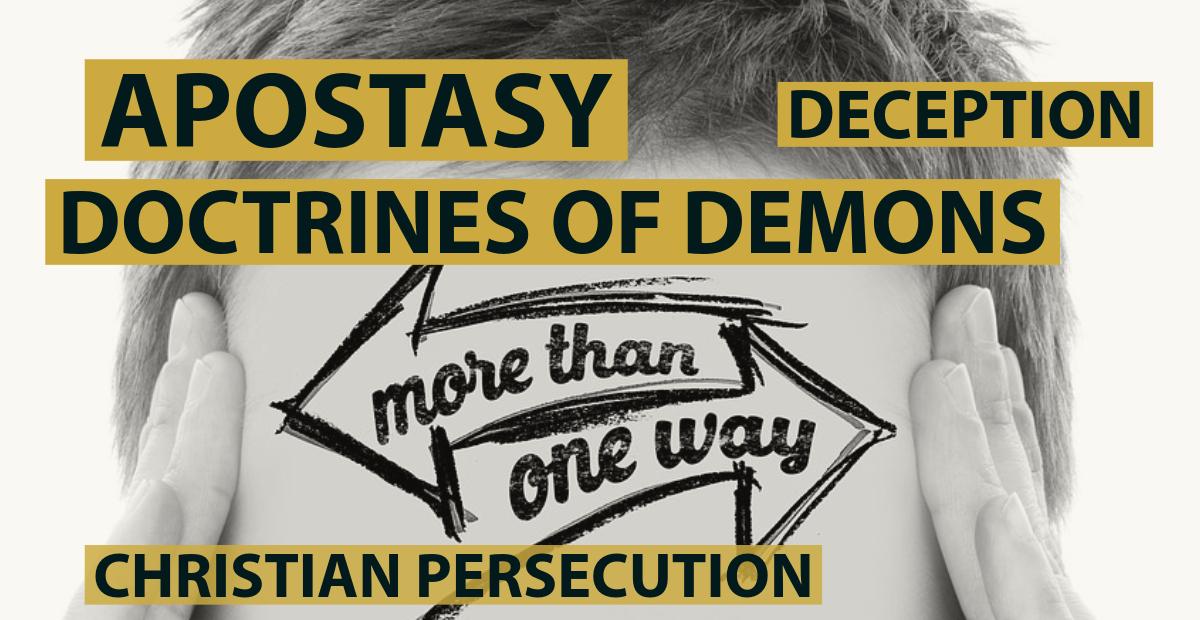 But there were also false prophets among the people, even as there will be false teachers among you, who will secretly bring in destructive heresies, even denying the Lord who bought them, and bring on themselves swift destruction.

Apostasy in the Church Abounds

The Bible is clear that in the last days the Church will turn away from sound doctrine, reject the truth (the gospel) and believe the lie. Scripture also is clear that as we get closer to the Lord’s return apostasy, false teachers and evil men will increase dramatically.

‘But the Spirit explicitly says that in later times some will fall away from the faith, paying attention to deceitful spirits and doctrines of demons, ‘

Deception is Ground Zero for Satan

Since the cross, Satan and his ministers of light (2 Corinthians 11:14-15) have been deceiving the masses. But not until recently, has there been an unprecedented level of apostasy across Christendom. Churches, Christian colleges and many so-called “Christian” organizations have completely abandoned truth and have adopted the lie. (Romans 1:25)

The reality of apostasy in the Church today isn’t just the unprecedented scope, it’s that there isn’t any room left to fall. All that remains is for Churches to start openly denying Jesus Christ and to actually start worshipping Satan. NOT HYPERBOLE IT’S THE TRUTH.

unprecedented scope, it’s that there isn’t any room left to fall.

The problem is a lack of faith or no faith at all. It always comes down to an individual not believing what God has said. The following verses demonstrate what happens when a person chooses not to believe God’s word;

‘For the time will come when they will not endure sound doctrine, but according to their own desires, because they have itching ears, they will heap up for themselves teachers; and they will turn their ears away from the truth, and be turned aside to fables. ‘

‘But know this, that in the last days perilous times will come: For men will be lovers of themselves, lovers of money, boasters, proud, blasphemers, disobedient to parents, unthankful, unholy, unloving, unforgiving, slanderers, without self-control, brutal, despisers of good, traitors, headstrong, haughty, lovers of pleasure rather than lovers of God, having a form of godliness but denying its power. And from such people turn away! always learning and never able to come to the knowledge of the truth. For of this sort are those who creep into households and make captives of gullible women loaded down with sins, led away by various lusts, Now as Jannes and Jambres resisted Moses, so do these also resist the truth: men of corrupt minds, disapproved concerning the faith; ‘

Stay in the Book Be Rooted in Sound Doctrine

The New Testament is replete with warnings of false teachers and deception. Scripture also provides believers with clear instructions on what we need to do, to defend against false teaching. The instructions are clear and simple. Study the Word of God, know the doctrine for Church today. So we can identify and expose false teaching.

Over and over again the apostle Paul admonishes believers… “to be nourished in the words of faith and sound doctrine”. (1 Timothy 4:6)

‘Study to shew thyself approved unto God, a workman that needeth not to be ashamed, rightly dividing the word of truth. ‘

‘All scripture is given by inspiration of God, and is profitable for doctrine, for reproof, for correction, for instruction in righteousness: ‘

‘Take heed to yourself and to the doctrine. Continue in them, for in doing this you will save both yourself and those who hear you.’

5 Stories that are Not Satire

The five stories below are real current examples of apostasy, doctrines of demons, Christian persecution and lack of sound doctrine in the Church today. If you have questions or want to comment you can do that at the bottom of this page.

This Female Pastor located in Denver, Colorado makes a call on Twitter and elsewhere for women to send her their purity rings. The rings are to be melted down and made into a statue of a vagina. How absolutely sick and demonic is that? Right away two words should be popping into your mind “golden calf”.

Read more about this here.

California State University San Marcos held a “Whiteness Forum” recently where they determined that the beloved Christian cartoon VeggieTales is racist. According to The College Fix, the group determined that “The Christian cartoon VeggieTales is racist because the villains are vegetables of color. The NFL is racist since most players are black and most coaches and owners are white. White women advance white supremacy when they support President Donald Trump.” The female student who created the report commented on her project in an interview noting that evil characters in the cartoon tend to have ethnic, or more specifically Latino, accents, while the good characters sound white.

3 Ministers Say Premarital Sex is Okay, Hookups are Not Sin; They Declare Purity is Outdated

Three false ministers, including one who identifies as homosexual and another as polyamorous, recently told the Huffington Post that they believe that sex before marriage is “not sinful,” and that it is rather “unreasonable,” “outdated and silly” to expect people to stay chaste until marriage. One said that he doesn’t “judge” those who choose to engage in random hookups, even if he doesn’t do so himself.

Read the full article at Pulpit and Pen

Popular contemporary Christian music (CCM) artist Lauren Daigle said this week on the “Domenick Nati Show” that she can’t answer whether homosexuality is a sin because there are people that she loves that are homosexual and she is not God. She noted that people should read the Bible to find out for themselves, and let her know what they learn. “Do you feel that homosexuality is a sin?” Nati, whose broadcast is aired on iHeart Radio, asked forthrightly. “You know, I can’t honestly answer on that, in the sense of I have too many people that I love—that they are homosexuals,” Daigle, known for the hits “How Can It Be” and “You Say,” told the celebrity publicist.

If you have a comment or question please leave it below.