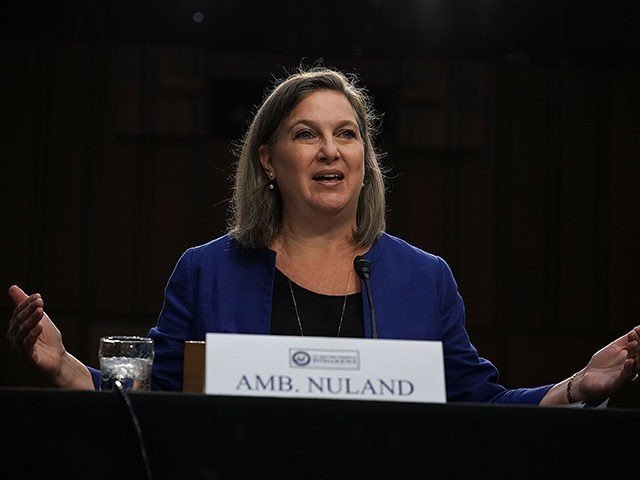 In 2016 Election Eric Ciaramella, whom Real Clear Investigations suggests is the likely so-called whistleblower, was part of an Obama administration email chain celebrating the eventual signing of a $1 billion U.S. loan guarantee to Ukraine.

That and other emails show Ciaramella interfaced about Ukraine with individuals who played key roles in facilitating the infamous anti-Trump dossier produced by Fusion GPS and reportedly financed by Hillary Clinton’s presidential campaign and the Democratic National Committee. One of those individuals, then-Assistant Secretary of State for European Affairs Victoria Nuland (pictured), received updates on Ukraine issues from dossier author Christopher Steele in addition to Nuland’s direct role in the dossier controversy.

Also part of the email chains was Christopher J. Anderson, who was a special adviser to former special envoy to Ukraine Kurt Volker. Anderson testified to the Democrat-led House committees running the impeachment inquiry.

Ciaramella’s name comes up in six Obama-era government emails that were released by the State Department as part of two previous Freedom of Information Act requests. At the time of the exchanges, Ciaramella served as the Director for Baltic and Eastern European Affairs for the Obama-era National Security Council, where he worked on Ukraine policy. He is now an analyst at the Central Intelligence Agency.

One email, titled, “Loan Guarantee,” involved Nuland, who was reportedly a key champion of the Ukraine loan guarantee policy.

“Hurray,” a celebratory Nuland wrote in response to a translated Ukrainian government announcement about the signing of the $1 billion loan guarantee. The announcement singles out Joe Biden as being present for the conclusion of an agreement leading to the loan guarantee.

Ciaramella was one of several people CC’d in the email, which was sent from the U.S. ambassador at the time, Geoffrey Pyatt, who was another key champion of the loan guarantee to Ukraine along with Nuland.

A RealClearInvestigations report by investigative journalist and author Paul Sperry named Ciaramella as best fitting the description of the so-called whistleblower. Officials with direct knowledge of the proceedings say Ciaramella’s name has been raised in private in impeachment depositions and during at least one House open hearing that was not part of the formal impeachment proceedings.