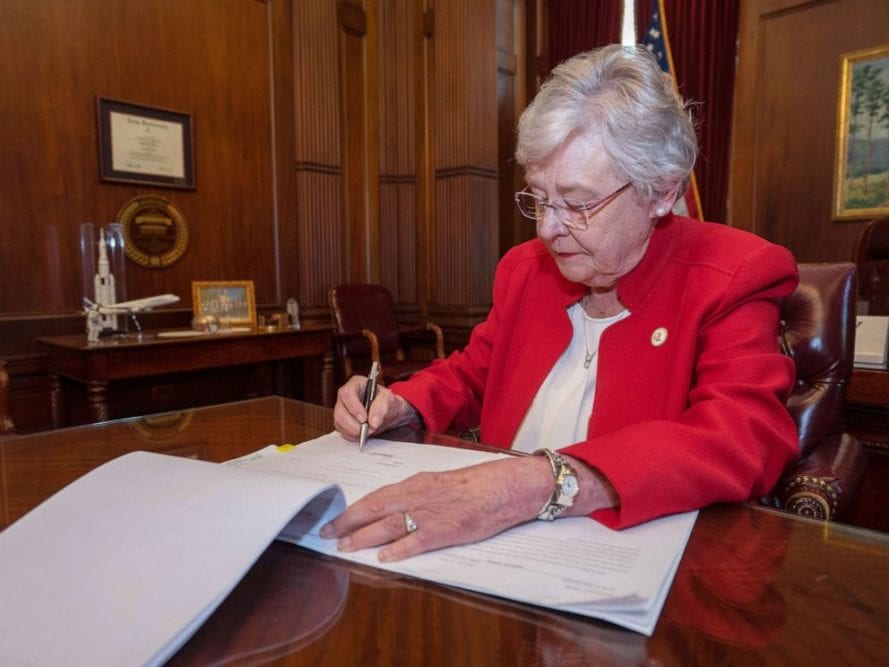 In her statement announcing her decision to sign the bill, Ivey points to the fact that the bill “was approved by overwhelming majorities in both chambers” of the state’s legislature.

“Many Americans, myself included, disagreed when Roe v. Wade was handed down in 1973. The sponsors of this bill believe that it is time, once again, for the U.S. Supreme Court to revisit this important matter, and they believe this act may bring about the best opportunity for this to occur. I want to commend the bill sponsors, Rep. Terri Collins and Sen. Clyde Chambliss, for their strong leadership on this important issue,” Ivey said in her statement.

The bill represents the views of Alabama voters. Last year Alabamans voted 6-40 for a ballot amendment that says unborn babies have a right to life. 55% of the voters were women, according to figures from the Alabama Secretary of State.

State House Bill 314, sponsored by Rep. Terri Collins, R-Decatur, would make an abortion and attempted abortion a felony. Exceptions would be allowed if the mother’s life is at risk. Mothers would not be punished for having an abortion under the legislation, which would make killing a baby in an abortion a Class A felony — punishable by life or 10 to 99 years in prison for abortionists who kill them.

Lawmakers approved the ban on a 25-6 vote late Tuesday. The legislation will take effect six months unless a court stops it. The Republican-dominated House of Representatives voted 74-3 in favor of the proposal.

Although abortion activists claim the bill targets women, the language of the bill makes it clear that’s not the case: “This bill would provide that a woman who receives an abortion will not be held criminally culpable or civilly liable for receiving the abortion.”

“We will not stand by while politicians endanger the lives of women and doctors for political gain,” wrote Alexa Kolbi-Molinas, a senior staff attorney at the American Civil Liberties Union’s Reproductive Freedom Project, in an email to CBS News following the vote. “Know this, Governor Ivey: If you sign this dangerous bill into law, we will see you in Court.”

Collins said the U.S. Supreme Court was wrong in Roe v. Wade, and unborn babies deserve a right to life.

“Just last year, roughly 60 percent of voters across the state ratified a constitutional amendment declaring Alabama as a pro-life state, and this legislation is the next logical step in the fight to protect unborn life,” she said, WDHN 18 reports.

Earlier, she told the Times Daily that she expects a legal challenge, and hopes the U.S. Supreme Court will uphold protections for the unborn.

“With liberal states like New York rushing to approve radical late-term and post-birth abortions, [the] passage of this bill will reflect the conservative beliefs, principles, and desires of the citizens of Alabama while, at the same time, providing a vehicle to revisit the constitutionally-flawed Roe v. Wade decision,” Collins said.

If approved and enforced, the legislation could save thousands of unborn babies’ lives every year. The Alabama Department of Public Health reported 6,768 abortions in 2017.

However, the abortion industry is expected to sue to block the law in court.

“They are trying to tee this up as an opportunity for the Supreme Court to reconsider Roe v. Wade and its progeny. There are already cases in the pipeline that will get to the Supreme Court long before this does,” said Randall Marshall, executive director of the American Civil Liberties Union of Alabama.

Marshall said the case could cost state taxpayers millions of dollars in legal fees, and he cited another case where Alabama taxpayers were forced to pay Planned Parenthood and the ACLU $1.7 million after a court struck down another pro-life state law.

That is a concern for a number of pro-life leaders. Even some pro-life advocates express concerns about the strategy of such legislation, because when states lose these battles, taxpayers often are forced to pay pro-abortion groups’ legal fees.

The abortion industry has succeeded in overturning similar laws in court. In 2012, the Oklahoma Supreme Court struck down a personhood bill as unconstitutional because it recognized unborn babies as human beings who deserve the right to life.

When considering a similar Missouri statute in 1989, U.S. Supreme Court Chief Justice William Rehnquist ruled that the statute was nothing more than a statement of position that had no bearing on banning abortions or even limiting them in any way.

Missouri had approved a statute saying, “the life of each human being begins at conception” and “unborn children have protectable interests in life, health, and well-being.” The statute required that all Missouri state laws be interpreted to provide unborn children with rights equal to those enjoyed by other persons.

There is more hope that the new conservative-majority U.S. Supreme Court may consider an abortion ban, but it is difficult to say if it would for certain.