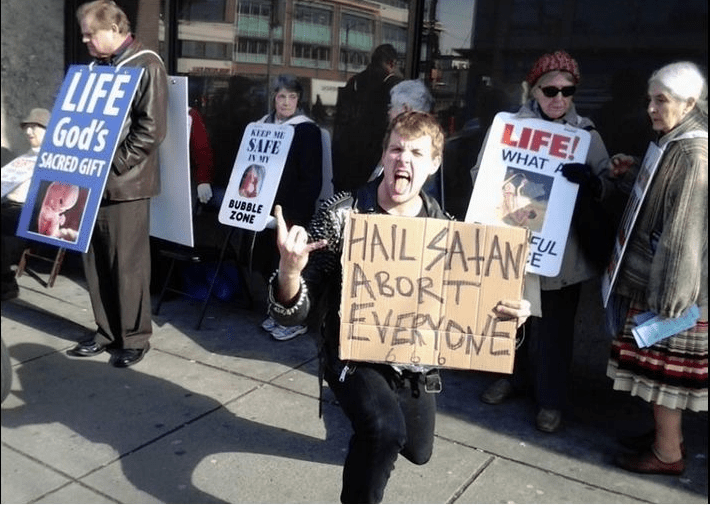 Students praying outside a Washington state Planned Parenthood said they were exposed to multiple instances of obscene and inappropriate behavior from people passing by, including an incident where a man masturbated at them from a car.

Whatcom Community College Students for Life leader Autumn Lindsey told the Daily Caller News Foundation that she and several other students were doing a “40 Days for Life” campaign Saturday outside the Bellingham, Washington, Planned Parenthood when the incidents occurred.

People drove by the group of four students Saturday “yelling obscenities and displaying crude gestures,” according to a Students for Life press release. One man masturbated in a car “towards the group” as his friend drove slowly by the protesters, it said. Another woman flashed the group while yelling, “My body, my choice,” according to the press release.

“It has only happened to us once, and personally I have never heard that happen anywhere else,” she told the DCNF.

Video footage showed another woman in a car shouting out “Hail Satan” as she drove away from the students.

“Satan is the one true lord,” the woman told the students. “Satan, the dark lord.”

“Do you have a sweet baby back there,” a person in the background of the video asked, to which the woman responded, “Oh yeah, I didn’t abort her. I kept her. Yeah.”

“We don’t need your prayers,” the woman told the students, and yelled before she drives away, “Hail Satan!”

Lindsey said “Satan” is mentioned and referenced toward people praying outside abortion clinics “more than you would think.”

“For some I think it’s just a way for them to try and get under our skin, but the woman driving in her car seemed to honestly believe it,” she said.

The press release also noted that a group of people “yelled threateningly in one young student’s face, calling him a ‘cocksucker,’” and that a man rode his bike past the students and threw a glass vial at them that shattered.

The students called the police to ensure that the liquid from the vial was not dangerous or harmful, according to the press release.

“This kind of intimidation causes some our volunteers to feel uneasy to sign up to pray for mothers and preborn children during a 40 Days for Life event,” Lindsey said in a statement. “We are only 11 days in, and we have already been bullied and threatened to the point where our volunteers are nervous to go alone.”

“But we will not back down because this just demonstrates how evil the abortion industry is,” she added. “We will stand united together and not let the bullies stop us even though the violence of abortion is celebrated by increasingly violent people.”

The students called the police regarding incidents at the abortion clinic on four different occasions, Lindsey said.

“Of course it can be frightening, but we stand together united knowing we are there because people are dying inside the walls of Planned Parenthood,” she said.

She added: “We know that we can always call the police if something happens and we always make sure our students feels safe. We will continue to be there everyday for the rest of the 40 days.”

“Whatcom Students for Life bravely stood up against the threats of intimidation and the obscenities hurled at them by violent pro-choicers,” Hawkins said in a statement. “Abortion advocates are becoming more violent against those who advocate for the innocent, but we will not be silenced.”