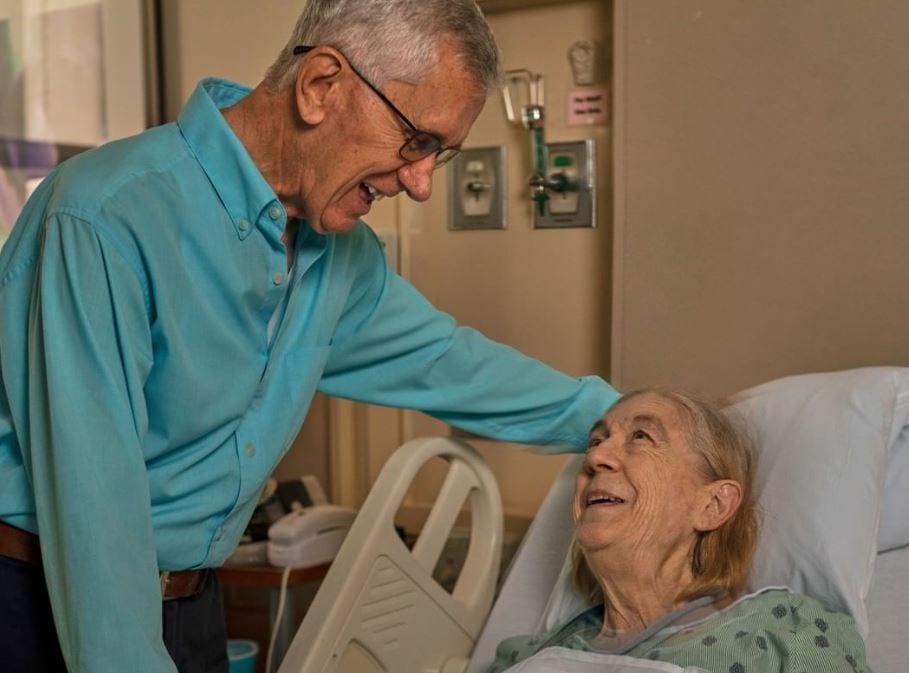 Knowing that her body was failing rapidly, Linda Nall placed a pleading call for help out the front of her Wimberly, Texas home. The 72-year-old was suffering from Lupus and required an urgent kidney transplant.

Lupus affects an estimated 1.5 million Americans and causes internal inflammation that can affect the skin, blood cells, kidneys and lungs.

At her wits’ end and suffering painfully from the dreadful disease, Nall erected a yard sign with the words, “I am [blood] type O and I need a kidney transplant.” The desperate woman then sat back and prayed for a miracle.

Not long afterward, something extraordinary happened — a man named Frank Dewhurst showed up at her door with an extraordinary offer. Being the head of the homeowners association’s grounds committee, Nall presumed that Dewhurst would insist that she took down her sign. Far from it, the 84-year-old announced that he was a blood match and offered his organ up for transplant!

“I’m O positive — I’m here to offer you my kidney,” Dewhurst told Linda, much to her astonishment.

However, at such an elderly age, the generous donor was fully aware that it might not be possible.

“The issue is health, not age,” Dr. Hassan Ibrahim, the head of Houston Methodist Hospital’s living kidney donor program, told the Houston Chronicle. However, following a series of tests, it was determined that Dewhurst’s kidney was wonderfully healthy, and he was given the green light to undergo transplant surgery! On April 30, he became the oldest kidney donor in the country.

“When he told me he wanted to give me his kidney, I was shocked,’ Nall said, according to a press release from Houston Methodist Hospital.

“It’s an incredible thing he has done for me and I am so grateful.”

Nall, who is recovering well following her surgery, told the Chronicle that it was “a miracle” and “a godsend” that Dewhurst decided to gift her his organ. “I can’t begin to thank him enough,” she said.

As for the fighting fit 84-year-old, he insisted that the life-altering surgery was “no big deal.”

“I’m healthy and had what she needed, a functioning kidney,” he added. “She wasn’t getting any better without one.”

← Prev: Gov. Gavin Newsom Welcomes Women to Have Abortions: Come to California to Kill Your Baby Next: Franklin Graham: Trump’s enemies will hurt America, could spark civil war if impeached - The Christian Post →