2020 Democrats appeal to an ‘imaginary god created in their own minds,’ Robert Jeffress says 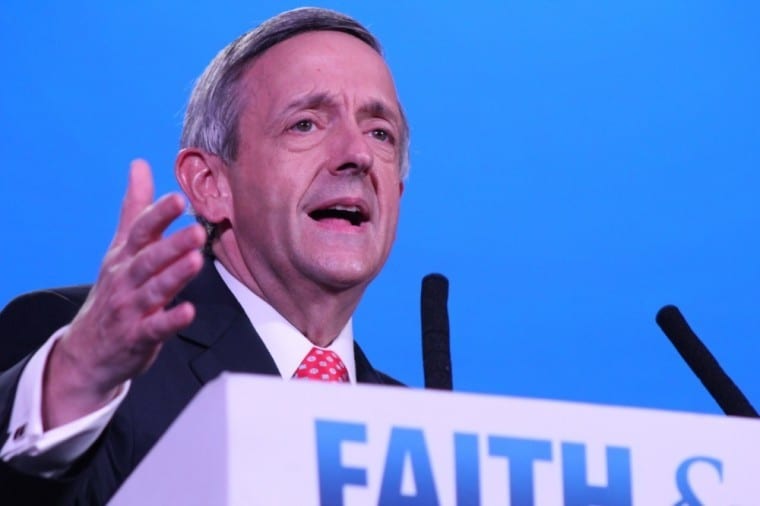 “Today, they are actively working to remove ‘so help me God’ from their oaths of office,” he stressed. “The problem runs much deeper than that. They are promoting policies and values that are completely antithetical to the Christian faith.”

Dallas megachurch pastor and one of President Donald Trump’s spiritual advisors Robert Jeffress criticized the Democratic Party’s recent hiring of a faith outreach director, saying Saturday morning that it is a “godless party” looking to an “imaginary God.”

Jeffress, the 63-year-old pastor of the 13,000-member First Baptist Dallas, spoke before hundreds of social conservative activists gathered for the final day of the four-day summit hosted by the nation’s leading conservative evangelical grassroots organization at the Omni Shoreham Hotel in Washington, D.C.

Referencing news this week that the Democrat Party hired Union Seminary Vice President Derrick Harkins to lead the party’s 2020 faith outreach efforts, Jeffress didn’t mince words about what he thought about the Democrat’s attempt to appeal to faith voters.

“I am not a Republican or a Democrat so I don’t say this from a partisan perspective,” the Fox News contributor said at the Faith & Freedom Coalition’s Road to Majority Conference. “But the truth is that when you talk about righteousness and unrighteousness. It is becoming clearer and clearer that the Democrat Party has truly become a godless party. It is a godless party.”

Jeffress, who has long been critical about the Democratic Party’s stances on abortion and LGBT issues, pointed out that some Democratic Party delegates tried to remove God from its own party platform in 2012.

← Prev: Three Babies in Minnesota Were Born Alive After Failed Abortions in 2018 and Left to Die Next: 7-Year-Old in Nigeria: How Herdsmen Shot Me and Killed My Uncle →