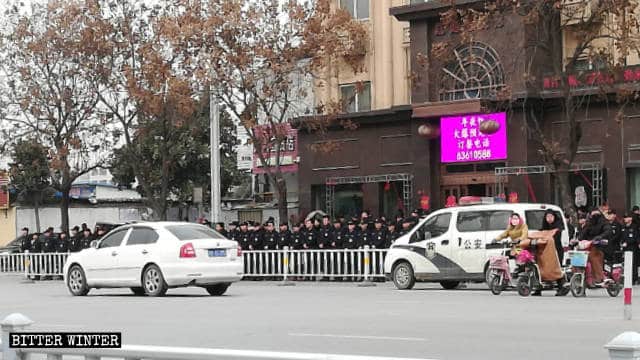 Police monitored China Gospel Fellowship and swooped in when all pastors were in one place. One had a heart attack, and all were forced to sign “repentance.”

One hundred fifty pastors, elders, and leaders from Henan Province’s China Gospel Fellowship – a network of house churches and one of the most significant evangelical Christian movements in China – planned to hold a year-end gathering. The Chinese Communist Party (CCP) had the Fellowship under surveillance and intercepted their plans. In a dramatic raid, all 150 pastors were arrested on the morning of January 15, when their meeting had barely begun.

The pastors and elders from Henan’s Nanyang city (including the counties of Tanghe, Tongbai, and Xinye) gathered at Haoyue Hotel to have their year-end meal together. According to eyewitnesses, at just past 10 o’clock in the morning, the deputy minister of Henan Province’s United Front Work Department (UFWD), accompanied by more than 150 special police officers showed up at the hotel. Some of them stood in three rows to block the path in front of the hotel’s entrance, and the others stormed into the hotel.

The cellphones of all 150 pastors were confiscated. During the raid, one pastor collapsed as he suffered a heart attack. He was placed quickly into an ambulance and taken away. The personal information of all the remaining pastors was registered. Afterward, each of them was taken to the police station in the municipality of their registered residence. Each was forced to sign a “statement of repentance” before they were released.

According to one local believer, all of the pastors were released the next day, but their phones and vehicles were all placed under surveillance. One preacher was singled out for extra observation: a surveillance camera was installed in front of her house. This 24-hour visual surveillance increases the pressure she feels, and discourages her from going out to preach. She has also been required to report to the police station every day.

The authorities returned to Haoyue Hotel the next day and warned the hotel staff to be discreet and don’t tell anyone about the pastors’ arrest.

“People who believe in God haven’t done anything wrong,” said one of the arrested preachers. “We were just having a meal together, praying to God, and worshipping God, but the CCP government wants to pick a quarrel with those who believe. They cannot find us violating the law, so they use all sorts of methods to suppress and punish us.”

The preacher sees a dangerous time ahead but remains defiant. “Government officials investigate the personal conduct of religious people or see if there are any issues, seeking to use this to accuse us of criminal charges and arrest us. These tricks won’t work; we haven’t done any of the things they said.”

← Prev: Christian Calendars and Couplets Prohibited in Henan Next: A Young Uyghur Woman’s Plea for Her Mother’s Release →